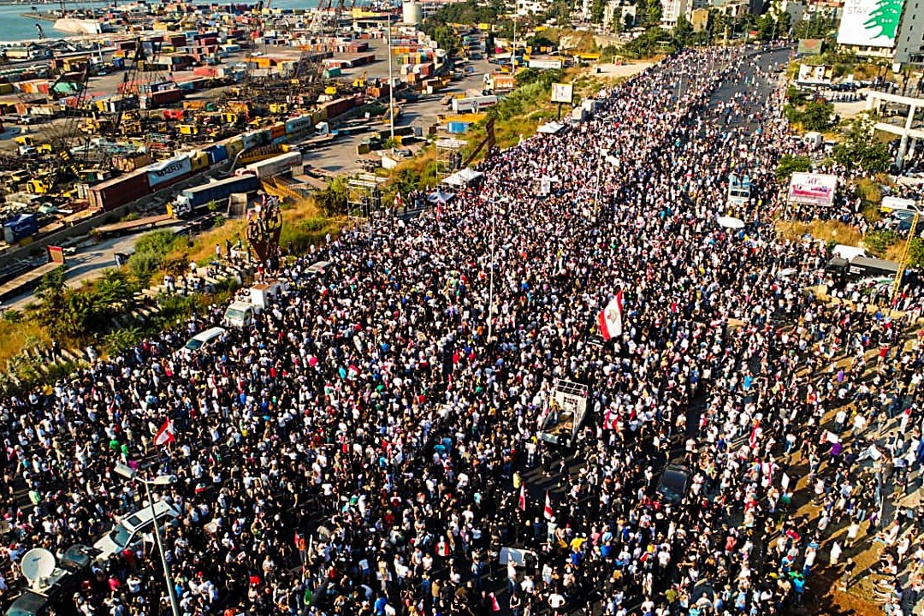 (Beirut) A funeral procession left Beirut port on Sunday evening to march through neighboring neighborhoods in the center of the Lebanese capital a few days after the first anniversary of a devastating explosion that killed more than 200 people.

As a sign of solidarity with the families of the victims who organized this demonstration, several dozen people gathered at a port entrance, some women dressed in black carried tall torches.

Preceded by wives, sisters and mothers carrying a portrait of a victim, three “symbolic coffins” covered in flowers and carried on their shoulders left the harbor, noted an AFP photographer.

Accompanied by the drums of a fanfare, the procession marched into the neighboring districts of Gemmayzé and Mar Mikhaïl, which were destroyed by the explosion.

“These coffins are symbolic to remind people that we have carried the coffins of our victims and our martyrs,” Ibrahim Hteit, spokesman for a family association, told AFP.

“It is our right to arrive at truth and justice,” he said.

In front of the wives, sisters and mothers carrying the portrait of a victim, three “symbolic coffins” emerged from the harbor, covered with flowers and carried on shoulders.

On Wednesday, thousands of people took to the streets on the first anniversary of the explosion on August 4, 2020 and mourned the 214 dead in a tragedy whose perpetrators were not brought to justice.

The explosion of several hundred tons of ammonium nitrate, which was stored in the port for years – “without any precautionary measures” according to the government’s own statements – also injured more than 6,500 and devastated entire city districts.

Despite the extent of the drama, the investigations on the ground are faltering, even if ex-ministers are in the sights of the judiciary.

The ruling class is accused of enjoying the immunity of these officials from their public office, doing everything possible to torpedo the investigation and avoid charges.

“The crime goes on, removes the immunities,” read a sign that was waved during the procession on Sunday evening.

Hélène Ata has lost her twin brother Abdo Ata. He was 38 years old.

“Every day the pain gets worse, in the shadow of the injustice that hangs over this affair, the inaction of those responsible and their desire to escape justice,” criticizes the psychologist.

“A year later, it’s like nothing happened,” she complains. “Every Lebanese has to take to the streets every day until justice is done”.

An association representing the families of those who disappeared in the civil war (1975-1990) also took part in the demonstration.

China has the two largest in the world