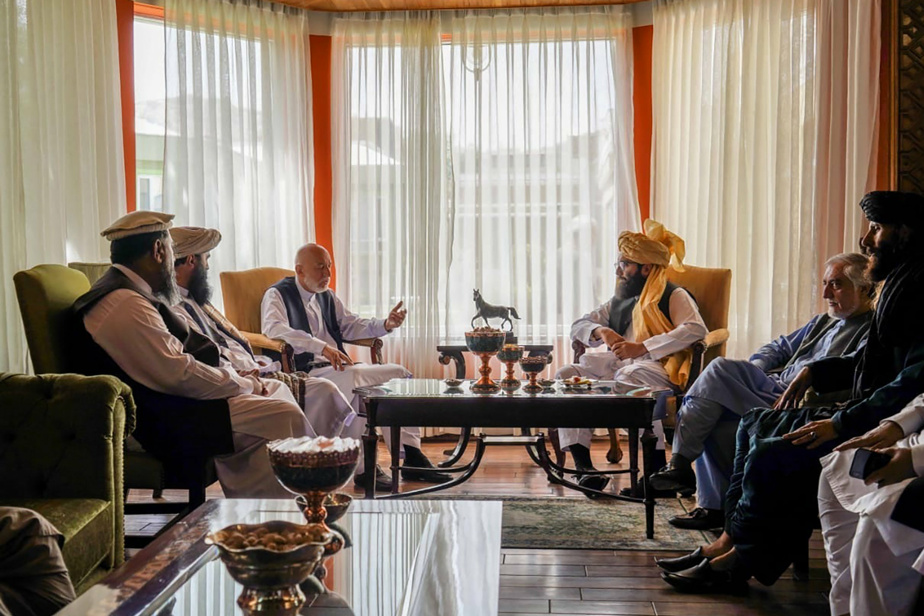 (Kabul) The Taliban met with former Afghan President Hamid Karzai in Kabul on Wednesday, while President Joe Biden said that some form of “chaos” was inevitable with the withdrawal of US troops.

The Taliban, who want to form a government, announced that they had “pardoned all former government officials,” said the Islamist monitoring group SITE.

They sent pictures of Hamid Karzai with Anas Haqqani, one of their movement’s negotiators.

The Taliban also met with former Vice President Abdullah Abdullah, according to SITE.

These negotiations were welcomed by ex-President Ashraf Ghani, who rushed from his country to the United Arab Emirates on Sunday, from where he spoke to his compatriots on Wednesday.

“I wish this process a success,” he said in a video message posted on Facebook, adding that he “has no intention” of remaining in exile. “I am currently in talks about a return to Afghanistan,” said the man who succeeded Mr. Karzai in 2014.

Former Afghan President Ashraf Ghani said he was convinced that “countless patriots would have been killed and Kabul destroyed” had he stayed in Afghanistan.

For its part, the United States, for which “nothing” indicated that the Afghan army and government would collapse so quickly, reiterated on Wednesday that it considered Ashraf Ghani to be “no longer a person of importance in Afghanistan.”

For President Biden, a withdrawal of US troops would have been impossible without some form of “chaos” in the country.

The idea “that there was somehow a way out without causing chaos, I don’t see how that is possible,” he told ABC on Wednesday.

At the same time, life in Kabul is increasing, although the fear is there. The Afghan capital was very quiet on Wednesday as most administrations and shops were closed due to Ashura, an important religious holiday for the Shiites.

However, many Afghans continued to gather outside the embassies while rumors of the possibility of visas or asylum circulated.

On Tuesday, at the first press conference in Kabul, two days after taking power, the Taliban attempted to reassure the international community as their movement co-founder Mullah Abdul Ghani Baradar, appointed to high office, returned to Afghanistan.

The world remembers their human rights record when they ruled 1996-2001.

“Everyone in the opposite camp will be forgiven from A to Z. We will not seek revenge,” said one of their spokesmen, Zabihullah Mujahid.

And to claim that the Islamists have learned from their first exercise of power and that there are “many differences” in the administration of their country, even if there are “no ideological differences”.

Concerns about the fate of women

A message that, by the way, did not reassure those most affected: “I am desperately trying to leave,” confided a thirty-year-old Afghan who worked for a German NGO.

“Yesterday I drove to the airport with my children and my family, the Taliban and the Americans shot at the people, but they still moved forward because they knew the situation was worse than death. They were waiting for them outside . “he said.

Games, music, photography and television were banned under the previous Taliban regime. Thieves’ hands were cut off, murderers were publicly executed, and homosexuals were killed. Women were forbidden to go out and work without a male companion, and girls were forbidden to go to school.

“We are committed to ensuring that women work according to the principles of Islam,” said Mujahid.

Another Taliban spokesman, Suhail Shaheen, claimed that the burqa, the veil that covers the whole body and face with a cloth grille at eye level, will no longer be compulsory this time around.

In a joint statement on Wednesday, the US and the EU, as well as 18 other countries, including Brazil and Canada, nevertheless expressed “deeply concerned” about the rights of “women and girls in Afghanistan”.

The Taliban, who present themselves as more moderate, seem to be received less hostile internationally than they were two decades ago, when only three countries (Pakistan, United Arab Emirates, Saudi Arabia) recognized their regime – although no one has yet gone that far – for it now.

China has agreed to maintain “friendly relations” with them, while for Russia the assurance of freedom of expression is a “positive signal”.

Turkey has also welcomed “positive messages” and Iran is making gestures of openness.

Westerners, for their part, are more cautious.

The US could recognize a Taliban government if it “safeguards the fundamental rights of its people,” especially women.

British Prime Minister Boris Johnson warned that London would not work “normally” with the Islamists who are measured “by deeds, not by words”.

The European Union will have to speak to the Taliban “as soon as necessary” because they “won the war in Afghanistan,” admitted Josep Borrell, head of European diplomacy, in a more differentiated manner.

An extraordinary meeting of the foreign ministers of the NATO countries is planned for Friday.

And while the World Health Organization (WHO) has warned against an interruption in humanitarian aid, the IMF has suspended funds for Afghanistan because of the climate of uncertainty.

Obstacles at the start

The evacuations continued under difficult conditions on site.

The Pentagon, which wants to evacuate as many people as possible, certainly stressed that the Islamists had made it easier for American citizens to “get through” to Kabul airport. But “we’ve seen reports that the Taliban […] prevent Afghans who want to leave the country from reaching the airport, ”complained the Foreign Ministry.

The European Union must welcome Afghans facing an “imminent threat”, said EU Commissioner Ylva Johansson, and Austria is already demanding that the EU provide for “prison camps”. In the neighboring countries of Afghanistan for those who are to be expelled from Europe.

Around 100 UN employees are being evacuated to Almaty in Kazakhstan, a spokesman said.

The first Afghans brought to safety by France arrived at Paris’ Roissy Charles-de-Gaulle airport on Wednesday evening. The operation could take several more days. “We owe you that. Welcome, ”said French President Emmanuel Macron on Twitter.

Protest for climate protection at the Garzweiler open-cast mine |

Afghanistan | Washington is making sure the evacuations continue through August 31st