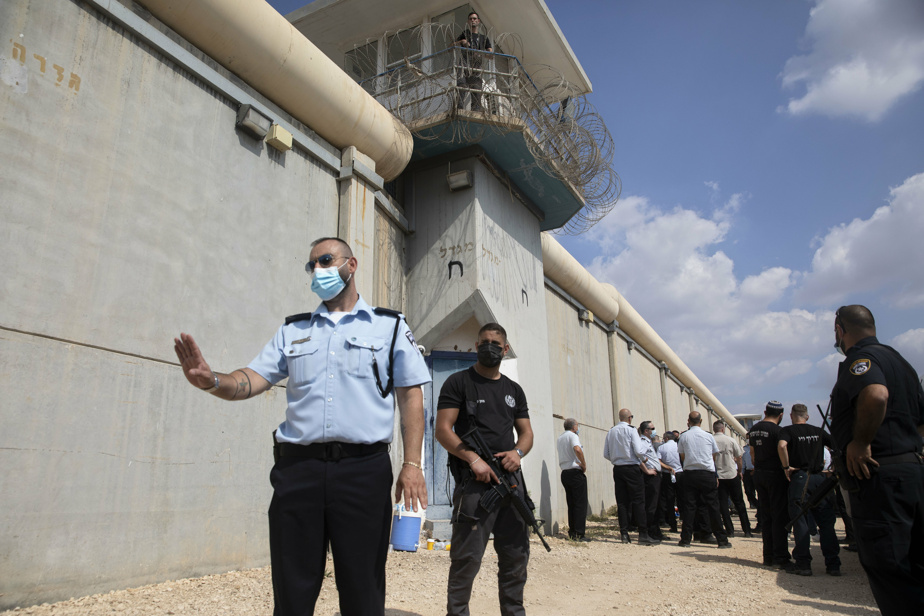 (Ramallah) The Israeli army has arrested relatives of Palestinians who have been on the run since they escaped from a north Israeli prison in the West Bank, a prisoner organization said on Wednesday when protests in support of the refugees were organized on Wednesday.

Since the flight of six Palestinians, members of armed groups, on Monday through a tunnel dug under a sink in the maximum security prison in Gilboa, Israeli forces have been conducting a massive manhunt, a practice almost gleaned from a Hollywood film .

The hole in the floor of a cell through which six Palestinian prisoners escaped from Gilboa prison in northern Israel on Monday, September 6, 2021. The prisoners dug a tunnel under the prison walls, as in the movie The Great Escape.

Observation drones were used and roadblocks set up, particularly in the occupied West Bank and around the Palestinian Gaza Strip, to find these prisoners, some of whom were held permanently for their role in anti-Israeli attacks.

Two brothers of Mahmoud Ardah – imprisoned since 1996, sentenced to life imprisonment and portrayed by local media as the architects of the operation – have been arrested by the Israeli army, the Palestinian Prisoners Club said.

Mahmoud Ardah’s cousin Mohammad also fled Gilboa prison. Two of the latter’s brothers were arrested, as was doctor Nidal Ardah, a member of their family, the association added in a statement.

Police and journalists are investigating the exit of the tunnel through which six Palestinian prisoners escaped from Gilboa prison. This hole outside the prison walls is the end of a tunnel that begins under a sink in a cell. The great Palestinian escape has sparked a large manhunt by security forces who want to find the fugitives, including Zakaria Zubeidi, a former leader of the Aqsa Martyrs Brigades.

Munadel Infeiat’s father, a refugee who is also a member of the Islamic Jihad armed group, was also arrested, according to the source.

Other family members of the refugees may have been arrested, Amani Sarahneh, a spokeswoman for the Palestinian Prisoners Club, told AFP, adding that some relatives had been questioned and released.

At AFP’s request, the Israeli army, which has occupied the West Bank since 1967, confirmed that “several arrests took place during the night,” but declined to provide further details.

The Israeli judiciary has issued an order banning the details of the investigation as the local press tries to lift the veil on the embarrassing and delicate case, fearing, among other things, that the Palestinians will attack while they are fleeing.

“Arresting someone to force a loved one into something is like the mafia,” tweeted Omar Shakir, head of the NGO Human Rights Watch for Israel and the Palestinian Territories.

A protester holds up a spoon that would have dug the tunnel through which six Palestinian prisoners escaped. The photo was taken during a solidarity demonstration with the fugitives in Khan Yunis in the southern Gaza Strip on September 8, 2021. The great Palestinian escape triggered a massive manhunt by the security forces who want to find the fugitives, including Zakaria Zubeidi. a former leader of the Aqsa Martyrs Brigades.

“It is the right of every prisoner to seek a way to his freedom,” said Palestinian Prime Minister Mohammad Shtayyeh on Tuesday and said he was “happy” about the escape.

The Palestinian Prisoners’ Club reported “tensions” in Israeli prisons on Wednesday. When asked by AFP, a spokeswoman for the Israeli prison authorities confirmed that fires had been lit in the prisons of Ktziot and Ramon (south).

“The situation is now under control, the fires have been extinguished,” the official said as Palestinian groups called for rallies in Nablus, Ramallah and Jenin on Wednesday evening in support of the refugees.

In the Gaza Strip and Jenin, a city in the north of the West Bank from which some refugees come, many people took to the streets on Monday to celebrate the escape of the prisoners who became “heroes”, but also of the men. most sought after by Israel.

For Jeff Bezos, that’s not true.