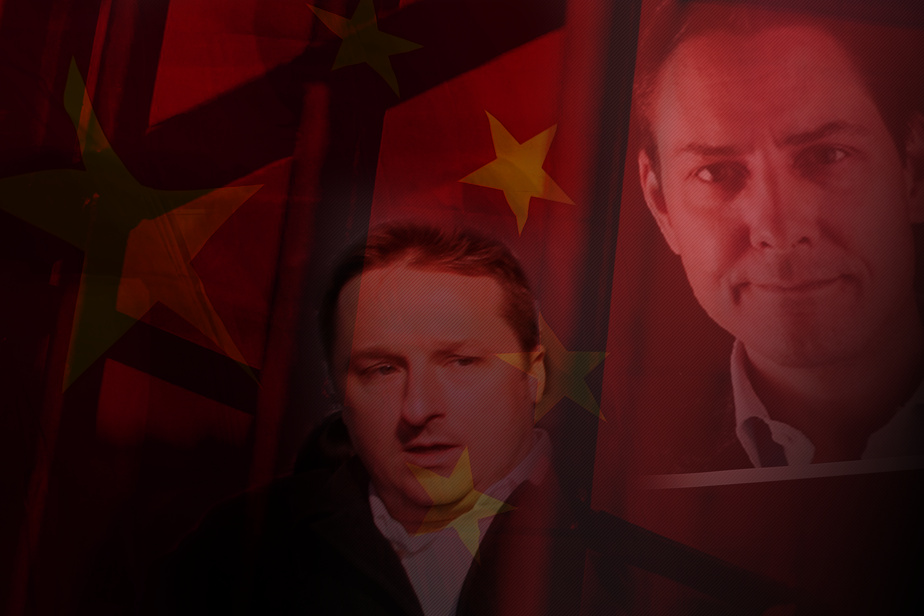 Relatives of Michael Spavor and Michael Kovrig, the two Canadians charged with espionage in China, are preparing for their 1,000th day of imprisonment. Everything indicates that they are not at the end of their sentences. Unless…

During one of the monthly consular visits he was entitled to, Michael Kovrig learned of the sentence imposed on his unhappy companion Michael Spavor in mid-August: 11 years in prison.

By Chinese standards, it is a relatively light punishment for allegations of espionage. But for someone who was arbitrarily detained and sentenced in camera after only a two-hour trial, that is enormous.

Police stand guard as a vehicle leaves the Dandong courtroom where the trial of Michael Spavor was held on March 19.

How did Michael Kovrig react to the announcement of the decision by the court in Dandong, northern China, which is still awaiting its own verdict in a Beijing prison?

His wife Vina Nadjibulla, who is closely following these consular visits, has no idea. She had no direct contact with her husband after the August 11th sentence was announced.

Vina Nadjibulla and Michael Kovrig, in Amsterdam in 2017

On the other hand, she knows that Michael Kovrig, who is also accused of espionage, still follows the Spartan regime that he has imposed upon himself since he was detained.

He tirelessly runs through his cell, forcing himself to take 7,000 steps a day – that’s five kilometers. He reads. Essays, books on climate change and stoicism, but also books on travel and sailing.

He sings, does yoga and meditates.

Excerpt from a letter from Michael Kovrig

In the letters he writes to his relatives and which he sends through Canadian diplomats – the last date in June – Michael Kovrig, a former Canadian diplomat who worked as a researcher for the NGO International Crisis Group, does not express much of his whims .

He records his thoughts about his reading and about life.

“He’s a very disciplined person. He tries to view his incarceration as a sabbatical year that enables him to read what he never had time to read, ”notes Vina Nadjibulla.

Except that it is no longer a sabbatical year, but three soon. This Saturday, the relatives of Michael Kovrig and those of Michael Spavor, a consultant who organized trips to North Korea, are underlining the 1000-day imprisonment of the two Canadians who are stuck in a showdown game between Beijing and Ottawa.

“This is the first time that the two families have organized an action together. It is a very important moment for us, ”says Vina Nadjibulla.

After 1000 days of unjust imprisonment, we want to acknowledge the courage of the two men, but also to make a call to come home.

A march is organized in Ottawa in support of the two Michael. Symbolically, it will enable 7000 steps to be exceeded.

The people known colloquially as “The Two Michaels” were arrested in China in December 2018, days after the RCMP intercepted Meng Wanzhou, CFO of the Chinese company Huawei, at Vancouver Airport, accusing him of circumventing the economic sanctions imposed on Iran to have.

Meng Wanzhou, in Vancouver on August 16

The arrest of the two Canadians is widely viewed as retaliation against the extradition proceedings against Meng Wanzhou. Beijing calls on the Trudeau government to reject the extradition request and allow Meng to return to China.

Ottawa replied that the trial must begin in the British Columbia Supreme Court. And that the Canadian government will not bow to the “hostage diplomacy” practiced by China.

The indictment of the two Michael, their hasty trials, the conviction of Michael Spavor and a recent article in the Global Times, the English-speaking body of the Chinese regime, are all gestures of pressure on Ottawa for his release by Meng. to urge Wanzhou, the former Canadian ambassador to China Guy Saint-Jacques observed.

This is the argument of the former diplomat Gar Pardy, author of the book China in a Changing World.

Other countries are negotiating a prisoner exchange with China, “but Canada is clinging to the legal route,” he complains.

When Joe Biden took over from Donald Trump, there was a silver lining in Ottawa. Perhaps the new president would drop the lawsuits against Meng Wanzhou and allow Canada to get out of this mess?

Canadian diplomats traveled to Washington in the spring to try to influence Biden’s administration, Gar Pardy notes. Without success.

Tortured by the Afghan Act, Joe Biden does not want to be seen as weak towards China.

The little glimmer of hope is gone.

The British Columbia Supreme Court hearings closed on August 18th. Judge Heather Holmes has convened the two parties on October 21st. Those following the case expect her to announce the date that she will make her decision.

After the decision as to whether the extradition request is admissible, the ball falls to the attorney general, who has to decide how to proceed. Deliver or not?

In the past, provincial courts have sometimes denied extradition requests from the United States, but this is rare, says Gary Botting, an extradition attorney who specializes in extradition cases.

Gary Botting, author of a book on the history of extraditions between Canada and the United States, notes that cases where a minister denies extradition despite a positive decision by a provincial court are also rare – but this happens in about 10% of the cases cases.

“In reality, the attorney general and attorney general could shut down this case now,” says Gary Botting. However, he agreed that a ministerial order issued in the middle of the trial would be highly unusual.

While they wait for Judge Holmes’ decision to be published, the relatives of the two Michael are reduced to assessing the chances of their trial’s success.

The judge could determine that the evidence in Ms. Meng’s case is insufficient or that her arrest was wrong and rule that the extradition request is unfounded. It’s not impossible, but still unlikely, according to Gary Botting.

If the judge approves the extradition, Meng Wanzhou will surely challenge the decision. The process could then take three or four years …

The next attorney general could also use his powers to prevent extradition to the United States. At the risk of bowing to Beijing’s blackmail.

If so, it is far from clear that the two Michaels would take the first plane to Vancouver or Toronto, warns Jonathan Manthorpe, journalist and author of a book on China’s bullying policy in Canada (Claws of the Panda).

China wants to spread a message that says, “If you challenge us, you will be punished.”

Jonathan Manthorpe, journalist and author of a book on China’s Bullying Policy in Canada

In the eyes of China, however, the snub is all the greater when it comes to Meng Wanzhou, whom Jonathan Manthorpe describes as the “princess” of the Chinese nobility, daughter of the founder of a company affiliated with the regime.

Mobilized around the 1000th day of imprisonment, the relatives of the two Michael have no illusions: They do not expect miracles before the announcement of Judge Holmes’ decision.

Then the files fall on the office of the Minister of Justice, reports Vina Nadjibulla. It could coincide with international meetings, the G20 in Rome at the end of October and the COP26 in Glasgow in November.

“That will offer new opportunities for negotiation. I hope we won’t miss you. “

“The two Michael” in dates

The Chinese authorities confirm that they have arrested Michael Spavor and Michael Kovrig, who they allege posed a national security threat.

Formal allegations against “the two Michael”

Announcement of the verdict against Michael Spavor

What other parties think

Prime Minister Justin Trudeau describes the arrests of Michael Kovrig and Michael Spavor as “arbitrary”. He also condemned the 11-year prison term given to Mr. Spavor by the Chinese courts on August 11th as “unacceptable and unjust.” However, in his opinion, the extradition proceedings for the businesswoman Meng Wanzhou should take place in court. Otherwise, it would be tantamount to bowing to the blackmail of the Chinese regime. That is what the main opposition parties think.

The Conservative Party takes a tough line on China. “After the arbitrary detention of Michael and China’s behavior towards the Uyghurs, we took several measures to counter the threat China posed to free countries,” writes party spokesman Axel Rioux. Conservative threats include: Canada’s exit from the China-led Asian Infrastructure Investment Bank, the imposition of sanctions under Magnitsky Law, and the blocking of Canada’s 5G network for Huawei.

“The Canadian government must use all diplomatic means at its disposal to bring Michael Kovrig, Michael Spavor and Robert Schellenberg (Canadians sentenced to death for drug trafficking) to Canada,” the NDP said in a written statement to La Presse. Regarding the extradition of Meng Wanzhou, the NPD says the process must continue as the case is currently in court.

Ottawa missed the opportunity to deal politically with the extradition request from the start, but once the case reaches the courts, the judiciary must be allowed to run its course, says MP Stéphane Bergeron. “But we shouldn’t do without that,” he says. The solution lies in diplomatic pressure on Washington in the hope that the Biden administration will drop its extradition request.

The Greens deplore the way “the two Michaels” and the Canadian judicial system are stuck in a geopolitical conflict between China and the US. He believes the legal process surrounding Meng Wanzhou must take its course: “Canada must not appear to bow to pressure from an authoritarian regime,” said the Greens in a written statement. They add that Canada must have a clear policy towards China, be it the Uyghur genocide or Huawei’s 5G technology.

WHO wants to test drug derived from Artemisia