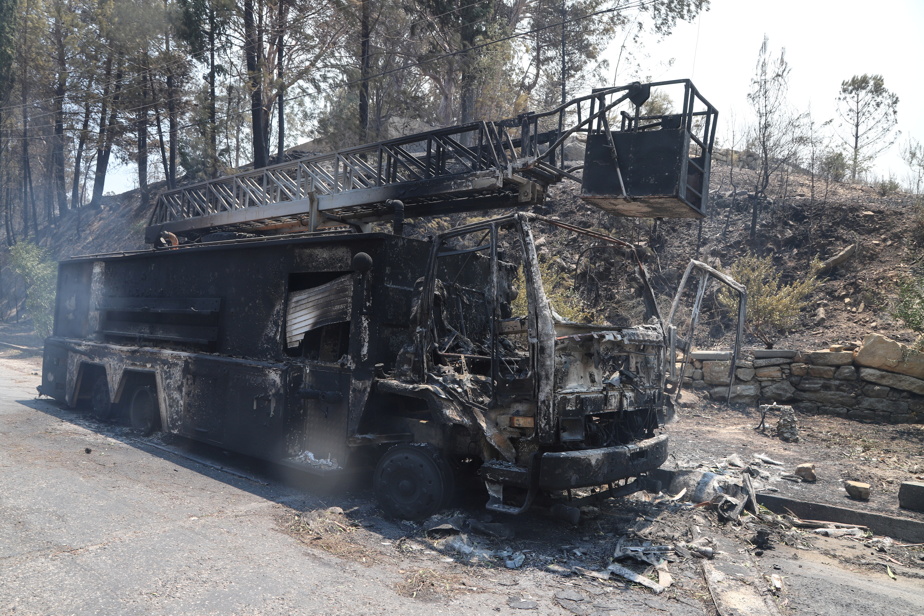 Individual fires that broke out in the forests of Manavgat, Alanya, Adana, Mersin, Bodrum and Marmaris near tourist spots in southern Turkey quickly reached populated areas due to strong winds.

Three people were killed in the fires, including an 82-year-old man who was unable to leave his home.

A forest fire near the city of Manavgat, east of the tourist city of Antalya, Turkey on July 29, 2021.

The fires devastated dozens of houses, fields and stables in several villages.

“According to initial information, 150 cattle and a thousand sheep were killed, 600 hectares of arable land and 50 hectares of greenhouses were damaged,” said Turkish Agriculture Minister Bekir Pakdemirli on Thursday.

The first fire broke out in a forest in Manavgat in Antalya Province on Wednesday and spread to neighboring communities.

As the fire continued, the authorities evacuated dozens of villages. A hotel in the tourist town of Bodrum was also evacuated.

Smoke is rising near a tourist hotel in the Icmeler region of the Aegean coastal city of Marmaris, Turkey, on Thursday, July 29, 2021 due to forest fires fueled by high winds.

Images were broadcast in Turkish media showing local residents running for their lives in panic on streets lit by flames.

Heavy clouds of smoke covered a dark orange sky over a beach resort in the city of Manavgat.

About 122 people, mostly local residents affected by the smoke and three with burns, were hospitalized. 58 of them were still being looked after on Thursday morning.

Ten people stranded on a boat on a lake surrounded by fire were rescued by rescue workers on Thursday.

More than 4,000 firefighters, assisted by helicopters and airplanes, try to get the fire under control.

The Russian embassy announced on Twitter on Thursday that three Russian water bombers were involved in the fire fighting operations.

Fires rage with temperatures of almost 40 degrees and gusts of wind of 50 kilometers per hour.

But for the mayor of Antalya, Muhittin Bocek, a criminal origin for the fire in Manavgat cannot be ruled out.

“The outbreak of fire from four different points is reminiscent of arson. But we don’t have any clear information on this at the moment, ”added Mr Bocek.

“Our citizens who have suffered from the fire will receive the necessary support,” said Turkish President Recep Tayyip Erdogan on Wednesday evening, who also promised a thorough investigation.

Qatar is working on the reopening of Kabul Airport

Zemmour acquitted on appeal for anti-Islamic and anti-immigration statements