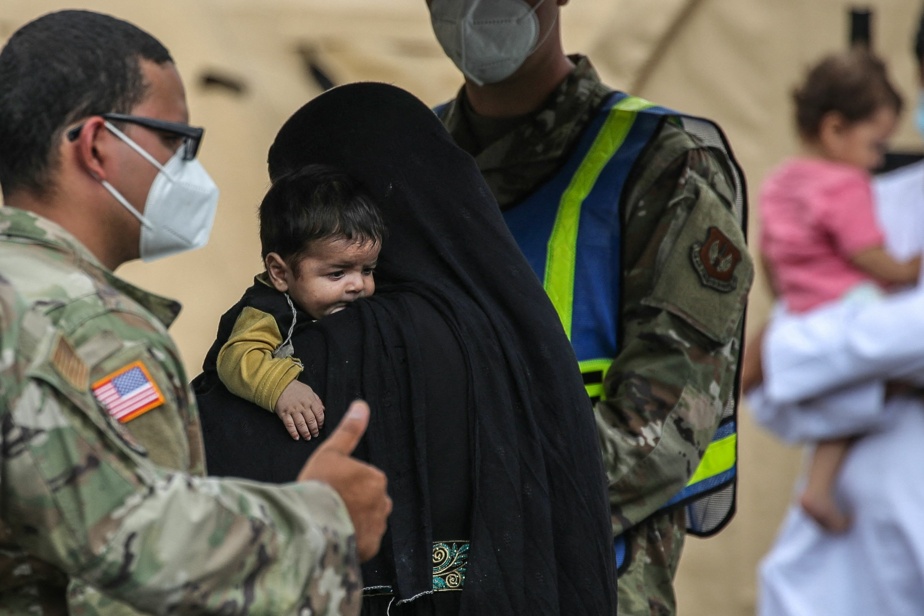 (Ramstein) Between the hundreds of beige tents that are lined up next to each other, children play ball, laundry dries on the fences. A little further we stand in front of the toilets.

In Ramstein, Germany, the largest US military base in Europe was transformed into a gigantic refugee camp from Afghanistan overnight on a US Air Force flight.

The survivors, Afghans who worked with the American armed forces in their country or who are considered “vulnerable” after the Taliban came to power, wait several days here to be transferred to another destination.

The stopover is over for around 200 of them, already on the tarmac at the foot of a Boeing 767-300 that will bring them across the Atlantic.

Some protect themselves with a blanket from the cold of the German autumn, which promises it. Others, too young to walk alone, climb the stairs in their parents’ arms.

In a hangar, the 27-year-old Rasool and his father, a former employee of the Afghan Interior Ministry, are waiting for their turn.

“I feel great now that I’m going to the United States,” he says. “We want to live there safely. ”

For these refugees, it is one of the last stages of an exodus, most of which has already taken them to Qatar or Kuwait, the upstream US bases for their airlift with Kabul.

Ramstein turned into a center for up to 17,000 people overnight, between the military base itself and a nearby camp.

“The main limiting factor was the beds and the tents,” said General Josh Olson, who ran the air force base, where the first evacuees stayed an average of four days. “We were able to mobilize material reserves in Europe and bring them here,” he says.

The big challenge: getting everyone to leave quickly and making space so that the next one is greeted urgently.

More than 3,500 people have already passed Ramstein. But there are still “too many arrivals and not enough departures,” said the commander.

After landing, mandatory medical examination for men, women and children, who often did not take more than a simple rucksack with them.

Many arrive dehydrated. Some are more seriously injured, especially from bullets, explains chief physician Simon Ritchie. He has also counted three births among the refugees in Ramstein.

From there by bus in the direction of Behelfsdorf, where the American Red Cross takes care of the necessary minimum.

The women and children sleep in the base’s hangars, which usually house military aircraft. The men occupy the 350 tents.

During the day the camp is mixed. The site is guarded by soldiers, often armed.

Mobilization of the city

The arrival of thousands of survivors in Ramstein not only mobilizes American troops.

To feed everyone, the base called the restaurant “Die Bühne” in the city center, which last week served vegetarian lasagna or 1000 servings of cheese spaetzle with cheese on one day.

“It was a challenge,” said manager Andreas Guhmann to AFP. But “we followed a call for help from the Americans, we know each other and if they need our support, we are happy to do so. ”

“You have been our neighbors for 70 years,” explains Mayor Ralf Hechler, “for us it is a matter of honor. ”

With the arrival of thousands of additional refugees, the restaurant Die Bühne could again be used as a substitute for meals that were transported to the base by the city’s volunteer fire department.

In question: Ramstein had “his busiest day so far” on Thursday with 10,000 arrivals in twelve hours.

And even if the airlift with Kabul ends, “we will remain active as long as I am asked” to take over aircraft from the Middle East, assures Commander Olson.

With a thought of the future when everything calms down.

“Right now, the adrenaline is getting us going,” he says. “But in a week, when it comes to cleaning everything up and getting back to normal, it’s a little scary. ”

With iOS 15, your iPhone can be located even when it’s off