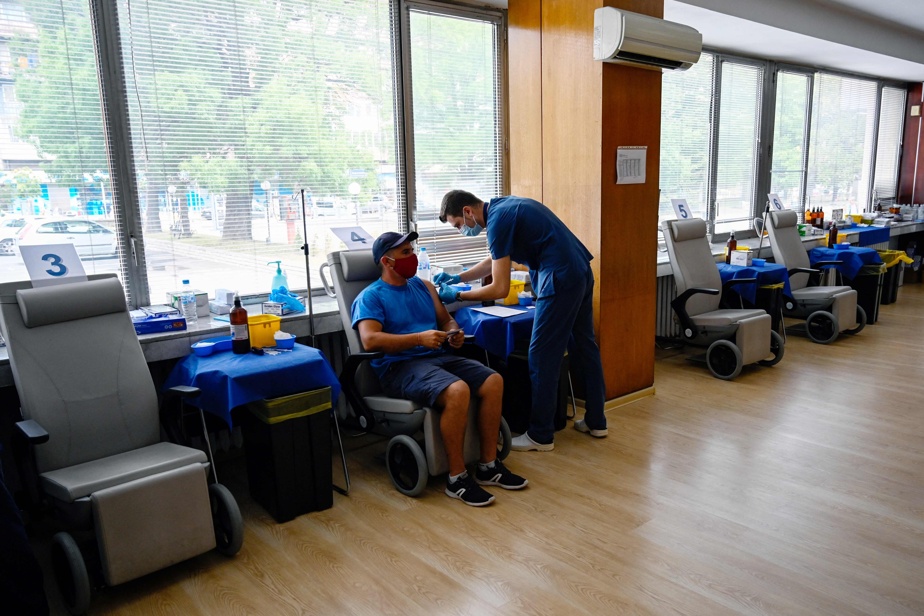 (Sofia) It is almost time for lunch and at a vaccination center in Sofia the hallways are almost deserted while some visitors hesitate. There is no shortage of doses, but there is disinformation in Bulgaria, which is by far the least immune in the EU.

At the start of a fourth wave of COVID-19, only 15% of its 6.9 million residents are fully vaccinated, compared with a European average of 53.3%, according to an AFP count based on official data.

On the streets of the capital, a pensioner declares “not to trust the vaccines developed in a hurry”, while a carpenter with a laughing eye confides that he prefers to rely on the virtues of “rakia” (eau-de-life).

“I think this is all an invention to spread panic,” says Gueorgui Dragoev, a 45-year-old construction worker, over a snack on a bench. “And if the virus ever exists, I will be able to defeat it”.

Health Minister Stoytcho Katsarov recently complained that “we have always been the last” since the campaign began in Europe, pointing out that Bulgarians are too “susceptible to conspiracy theories”.

The authorities are even forced to destroy thousands of cans or give them to other countries from Bosnia to Bhutan.

AFP, which set up a digital verification unit in Bulgaria in mid-March, has since devoted half of its articles to the coronavirus.

Videos showing that vaccines contain chips that make the arm “magnetic” have been shared a thousand times on Facebook.

Other internet users point out dangerous side effects or even wave an alleged massive mobilization against the French health passport by diverting pictures of the celebration of the French World Cup victory in 2018.

This fake news is circulating all over the world, but in this Eastern European country it is spreading like wildfire.

In this Russophile country, Nelly Ognyanova, professor at the University of Sofia, denounces the hand of Moscow, whose Sputnik-V vaccine has not yet been approved by the European regulatory authority. “It’s no secret that this is part of a hybrid war in the Kremlin,” she argues, referring to troll factories on the Internet.

“Not an easy decision”

Journalists and experts have “a special responsibility in their distrust of the vaccine,” said the analyst.

“The media give the floor to specialists” who are not very competent or who defend controversial theses. And this “in the name of pluralism”, but in reality “they put people in danger,” she protested to AFP.

It must be said that some of them occupy prestigious positions, such as Atanas Mangarov, who heads the COVID-19 unit at the Infectious Diseases Hospital in Sofia, but has discredited himself during the crisis, wearing masks, vaccines and for Calm and herbalism rejects teas against the virus.

Katerina Nikolova, who received her second dose of Pfizer, said she was “confused by the conflicting opinions on television”. “It wasn’t an easy decision,” she breathes.

Amid this “confusion”, citizens are reluctant to learn the truth from the authorities they are “wary of,” added Parvan Simeonov, an analyst at the Gallup Institute.

The low vaccination coverage can also be explained by “a high level of contamination,” he says: the former patients “postpone the injection,” an option recommended by the doctors.

Studies suggest that 2.5 million people could have contracted the virus, much more than the official infection figures (around 430,000 cases). In the poorest country in the EU, only a few are willing to submit to the often expensive tests.

No health passport here, no containment measures: According to Mr Simeonov, Bulgarians will only change their minds if “fear” grows, one of the highest death tariffs in Europe, in the face of COVID-19, which has killed nearly 18,300 people since the pandemic began .

Taliban claim to have captured Afghan province of Penjir |

A million Haitians are at risk of starvation this winter