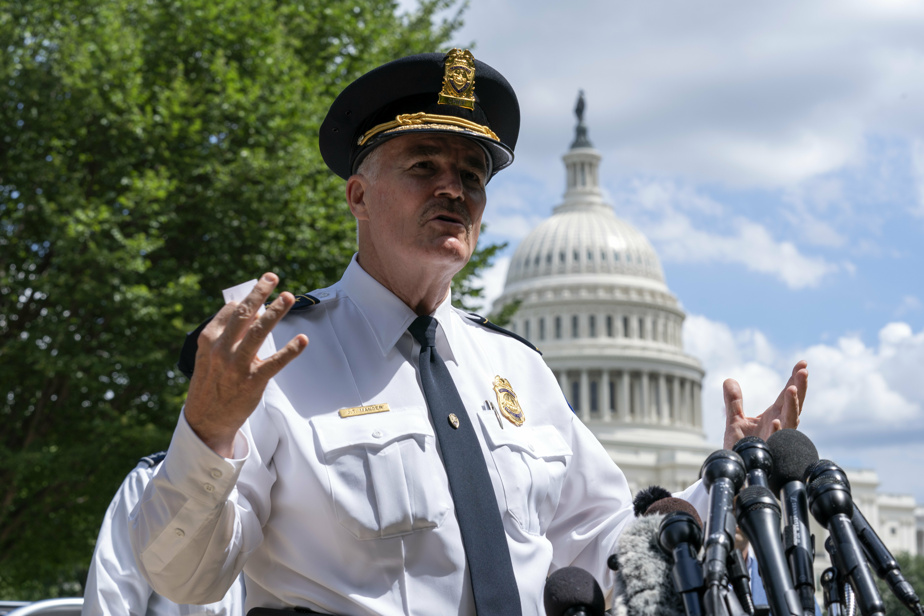 (Washington) No bomb was found in the vehicle of a person who had threatened for hours to detonate an explosive device near the Capitol in Washington -Ram attack.

The 49-year-old suspect surrendered early afternoon after tense negotiations with police, who identified him as Floyd Ray Roseberry.

The white man with a shaved head and a goatee had filmed live on a Facebook account on behalf of Ray Roseberry that morning as he uttered incoherent threats while driving a black van.

He had parked early that morning on a sidewalk in front of the Library of Congress, which overlooks the majestic dome of the Capitol on the other side of a park.

The man, identified by law enforcement as Floyd Ray Roseberry, 49, from North Carolina crawled out of the vehicle on the tarmac and was arrested shortly before 2:30 p.m.

“We did not find a bomb in the vehicle, but materials that could be used to make bombs were recovered from the van,” and the investigation is ongoing, Capitol police wrote in a statement late that afternoon.

The streets around the Capitol, the enclosure of which has been under high security since the attack on January 6, have been cleared again.

Facebook has not made its profile available since then and is investigating the facts, a platform spokesman told AFP.

“Biden on the phone”

“I’m trying to get Joe Biden on the phone,” the suspect said in the video watched by AFP, in which he sometimes pointed his lens at the Capitol.

“I’m telling you when the snipers come, they start shooting at the window, this bomb is going to explode,” he said, referring to the snipers who were deployed on the spot.

The person also suggested that four more bombs had been placed elsewhere in other cars. And he attacked Joe Biden’s Democratic Party, which has a majority in Congress.

“Do you know what the Democrats are doing? You are killing America. You make people leave America. ”

At this point, investigators have no evidence that the suspect had any accomplices, Capitol Police Chief Thomas Manger said at a press conference following his indictment.

“I think his mother died recently and we spoke to members of his family and he had other problems,” the official said.

The man comes from North Carolina, a state several hundred kilometers south of the federal capital.

NBC footage shows the person getting out of their vehicle, kneeling, raising their arms, and then crawling towards the police.

All surrounding buildings, including the Supreme Court, the Republican Party headquarters and the offices of Congress, had been evacuated that morning.

After parking in front of the famous Library of Congress at 9:15 am, “the driver of the van told the local officer that he had a bomb and it appeared he was in that person’s hand,” explained Mr. Manger.

Congress is not in session this week, but Parliament officials and assistants were present at the Capitol.

The seat of the American legislature remains marked by the memory of the January 6 attack.

Hundreds of pro-Trump protesters then forced their way into Congress as parliamentarians gathered to certify the victory of Democrat Joe Biden over the outgoing Republican president.

Almost 600 people have now been arrested for their involvement in the fatal attack.

On April 2, one police officer was killed and another injured when a young man threw his car into a roadblock protecting the entrance before he was shot.

Investigation into the murder of an activist | Russia convicted of “violation”