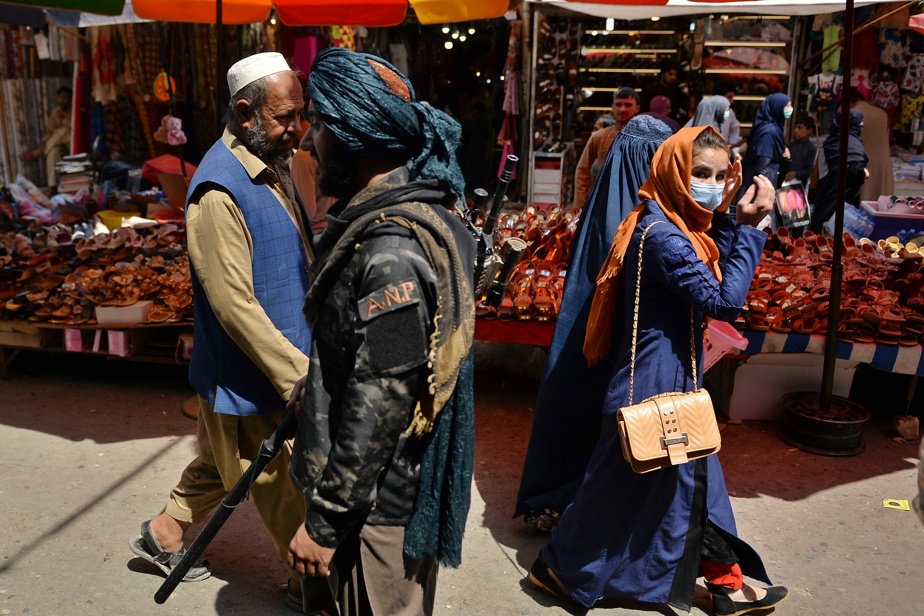 (Kabul) Now what? After the US withdrawal, a new page full of uncertainty opens up in Afghanistan, where the promises of the new Taliban regime are initially struggling to convince a section of the population who is reminiscent of the brutality of their regime between 1996 and 2001.

Many Afghans fear that the Islamic movement will apply a strict interpretation of Sharia, Islamic law, as it did in their first term, which would lead to the disappearance of women from the public sphere and the persecution of opponents.

The economic and humanitarian situation of the country, one of the poorest in the world and whose economy is heavily dependent on suspended international aid, is also worrying.

Since they came to power in Kabul on August 15, the Taliban, who are trying to maintain a moderate image apart from remembrance of their first term in office, have multiplied their promises.

Its main spokesman, Zabihullah Mujahid, announced in particular a “general amnesty” for opponents and announced that women would be allowed to work in certain sectors, especially in health care.

The new regime also made it known that women could study in university, but in same-sex classes, and that an “Islamic and sensible” education program would be offered.

He also promised an “inclusive government”. Contacts were made with former opponents such as ex-President Hamid Karzai or personalities from the Panchir Valley, mostly of Tajik origin.

They also sent representatives to meet members of the Hazara Shiite minority, persecuted by the Taliban in the 1990s.

Do the Afghans believe that?

For the time being, her statements are having a hard time convincing the Afghan people and even less reassuring them. Thousands of people have tried desperately to leave the country during the massive airlift at Kabul airport in recent weeks, a testament to the continuing distrust and fear of the Taliban.

The Taliban “will do everything possible to deprive women of their basic rights. The world shouldn’t look the other way […] let us have no illusions about that, ”warned Shaharzad Akbar, President of the Afghan Independent Human Rights Commission, on Twitter.

What about the international community?

The Taliban have established contacts with several regional powers, be it Pakistan, Iran, Russia, China or Qatar. But the road to recognition of the new regime in Kabul by the international community looks long.

The United States and several Western countries have made it clear: The movement must “earn” its legitimacy and in this regard respect for human rights, especially those of women, is being scrutinized, as is the possibility for Afghans to surrender abroad .

The main western and international donors have stopped helping the country. And access to the Afghan central bank’s reserves in the United States has been frozen.

The resumption of international aid, which in 2020 accounted for more than 40% of Afghan GDP, should in any case not take place before the international community has recognized the new regime.

In this context, the UN warns this winter of a humanitarian catastrophe that could affect the Afghans.

What is the impact on the economy?

“Afghanistan’s economy is fragile and dependent on international aid,” notes the World Bank.

With the discontinuation of international aid, the Afghan economic situation poses a major challenge for the new regime, which has to find the means to pay the officials’ salaries and to keep the vital infrastructure (water, electricity, communication) in good working order.

According to several analysts, economic pressures could fuel the discontent of part of the population who had benefited from increases in living standards in at least some cities over the past twenty years.

The Taliban are undoubtedly in a more comfortable position than when they came to power in 1996, as some of their main rivals or enemies have fled or captured.

The last close resistance to the new regime is in the Panchir Valley. However, recent comments suggest that a deal is not entirely ruled out.

The rivalry between the Taliban and the IS group, on the other hand, could pose a real threat. The two groups compete to embody jihad, and the local branch of ISIS has harshly criticized the Taliban’s deal with Washington that resulted in the withdrawal of the last US troops from the country on Monday.

We need to add to this picture several local militias that are present across the country and could turn against the Taliban.

For the first time in seven months: Biden and Xi are on the phone |

The press in Iraq | “Destruction is not just material”